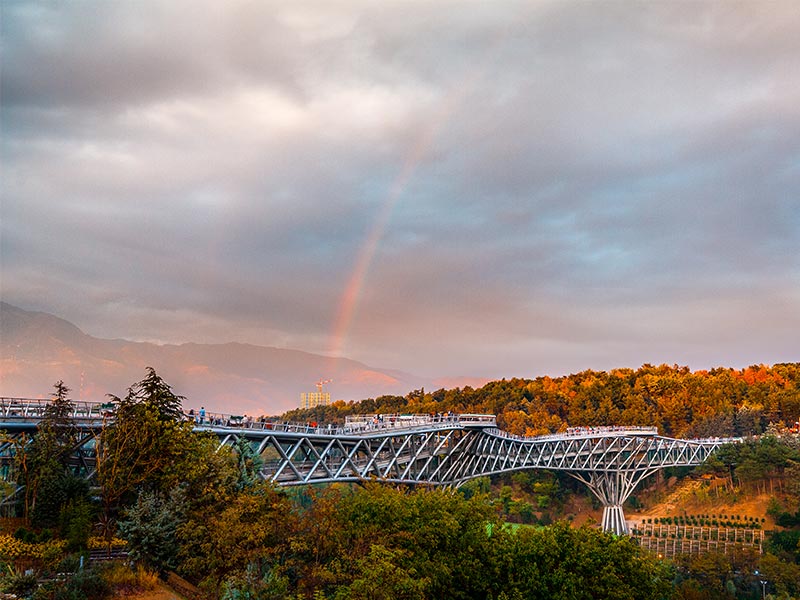 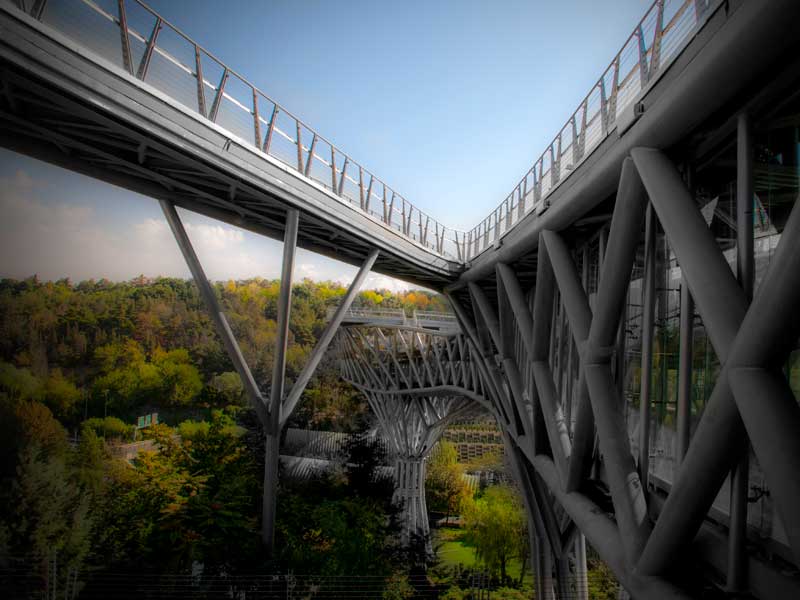 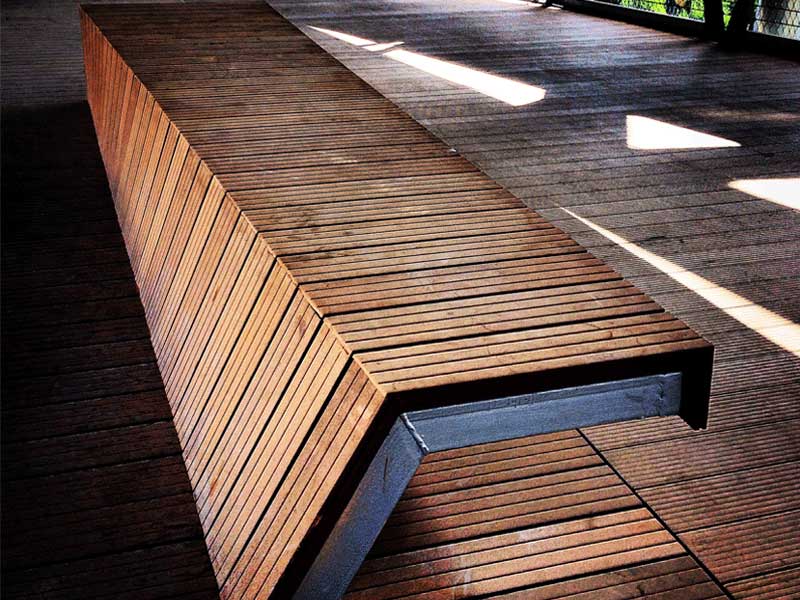 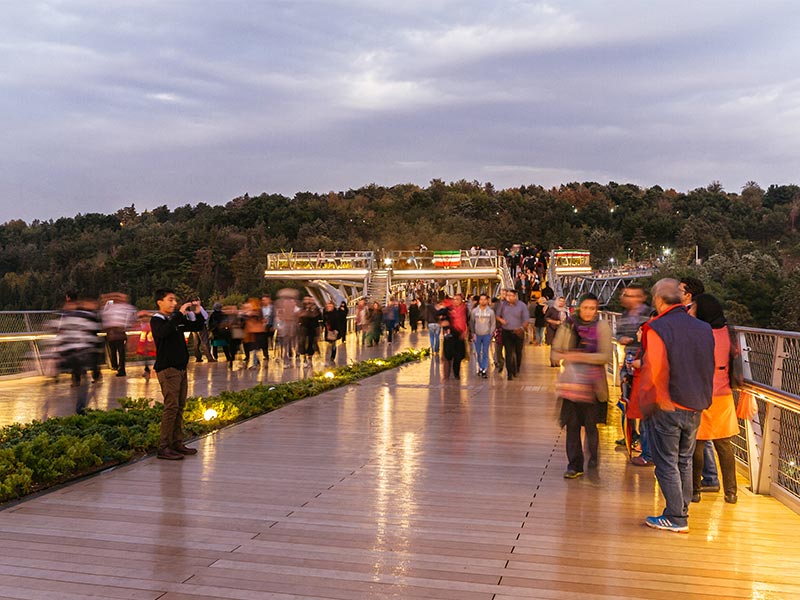 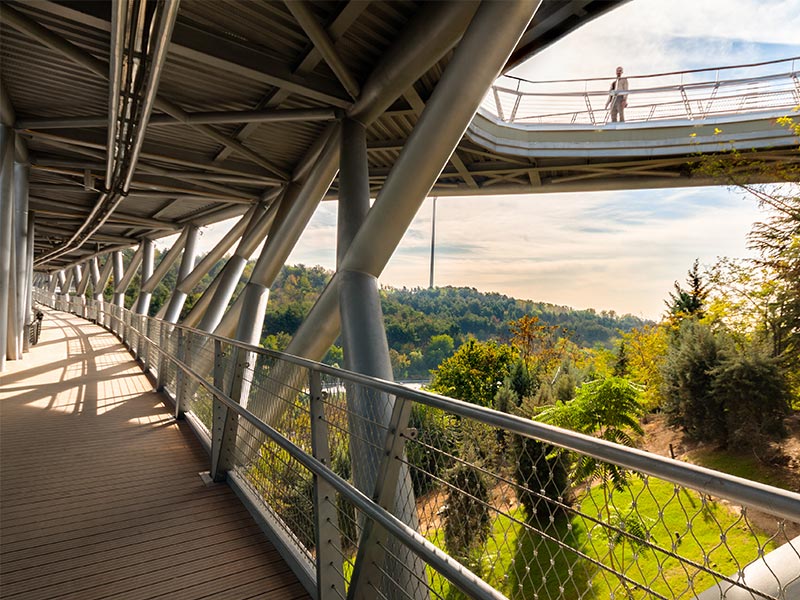 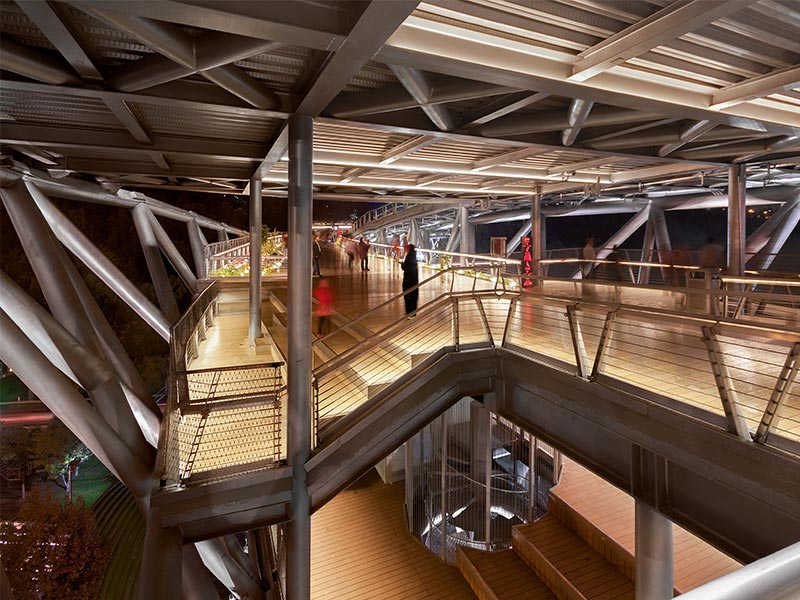 Tabiat Pedestrian Bridge is located in the northern part of the city of Tehran in a zone called Abbas Abad Lands; this is a 559Ha area which is mainly dedicated to cultural spaces such as libraries and museums, as well as public parks.

Tabiat Bridge was designed in order to address the need to improve access for pedestrians between the two parks, which are divided by a major highway. ‘Tabiat’ means ‘Nature’ in Persian language.

The bridge crosses Modarres Highway, one of the main highways of the city, and connects Abo Atash Park on the west to Taleghani Park on the east. The intention was to design a pedestrian route that was completely separate from the highway.

The 270 meters long bridge is the largest pedestrian bridge built so far in Iran. Design of this bridge was the result of a two-phase competition which started in May 2008.

The winning design was selected in August of the following year, with detailed structural and architectural design beginning in September 2009 and construction work began in September 2010. It was inaugurated in October 2014.

Tehran Tabiat Bridge was designed based on 5 main premises

1- In the original master plan the idea was to connect one point in one park to one point in the other park, but here the architect's idea was to create multiple paths on each park that would lead people on to the bridge.

On the east side, there are multiple paths branching from both levels of the bridge and connecting to other paths within Taleghani Park.

On the west where it connects to Abo Atash Park, the bridge becomes 55 meters wide forming a plaza; this makes it difficult to recognize where the park ends and where the bridge starts.

On the lower level similar to the other side there are other paths that connect the bridge to father points in the park.

2- This bridge is a space intended to be a place to linger rather than just one to pass through, and to act as an extension of the parks, so seating areas and green spaces on all parts of the bridge has been considered, as well as a coffee shop and restaurant on the two sides of the lower level, to have enough means to keep the users slow down and stay on the bridge.

3- Creating a curved path for the bridge was also intended to contribute to this aim; on the straight alignment that is typical of most bridges in the order to achieve structural efficiency, produces a single point perspective, which encourages users to keep going and the destination is quite clear.

In this case, the idea was to make a curved path with variable width and changes in slopes, to slow down the users and create a sense of mystery about the destination.

4- Since the site was covered by trees, especially on the east side, the number of columns and their location was designed in a way to have the minimum footprint on the ground in order to avoid having to remove trees.

This resulted in having similar to trees, with the largest span between them over both lanes of the highway to be 93 meters.

5- The structural concept was to have a spatial structure large enough to create an inhabitable architectural space while at the same time acting at the structure.

The result was a dynamic from made up of a 3-dimensional truss with tow continuous deck levels that sits on three tree shape columns. Where the truss meets the branches of the columns, it becomes the highest and widest.

At these points the bridge becomes three levels, the third level areas act as viewing platforms, providing a wide open space which can also be used for public performances. 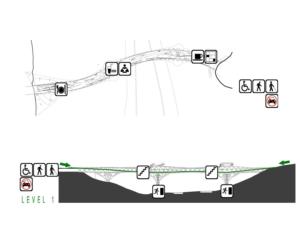 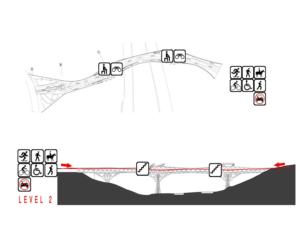 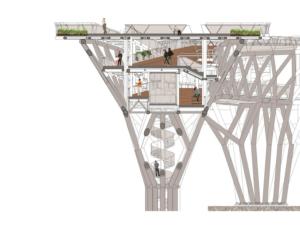 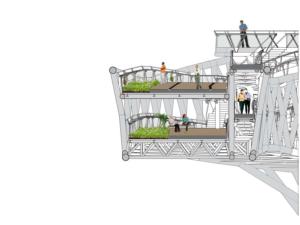 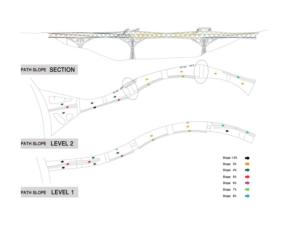 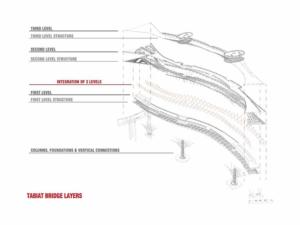 2014   Winning the Golden Brick of Tehran on the World Habitat Day 2014 organized by UN-Habitat, Tehran, Iran

2014   The Best Steel Structure in the country at the 4th International Conference on Steel and Structure, Tehran, Iran